AFSCME Council 31 is in our corner!  We're happy to join them in the fight for the middle class!

I am very proud to again be endorsed by the Chicago Laborers' District Council. These hard working union members recognize that I support their quest to help maintain what is left of the middle class. So their support is important to me.

I wholeheartedly support Equality Illinois' mission and vision for all people: - to build a better Illinois by advancing equal treatment and full acceptance of the LGBT community.  I am therefore honored to have earned their endorsement.

In honor of Labor Day, I am proud to announce that the United Auto Workers (Region 4) has joined the Illinois AFL-CIO, the Illinois Federation of Teachers, and Teamsters Joint Council 25 in endorsing our campaign!

As a strong advocate for improving educational opportunities for all Illinoisans, I am very proud to announce that the Illinois Federation of Teachers has endorsed me for State Representative!

We can add 314Action to the list of endorsers!  This group is interested in getting good scientific minds elected: "We’re on a mission to elect more scientists to Congress, state legislatures, and local offices. As trained problem-solvers, STEM professionals are ready, willing, and able to find solutions for the significant challenges facing America in the 21st century."

I am very proud to once again have earned the endorsement of the Illinois AFL-CIO!  Together we will fight for fair and equitable working conditions for every American!

The Illinois Federation of Teachers has endorsed our campaign again!  I'd be happy to carry their banner to Springfield!

I am proud to once again be endorsed by the AFL-CIO. Unions brought the fight for basic decency to the workplace. Even if you're not part of a union, you most likely have benefited from their fight. Unfortunately, union membership has dropped and many of the gains we take for granted could be at risk. 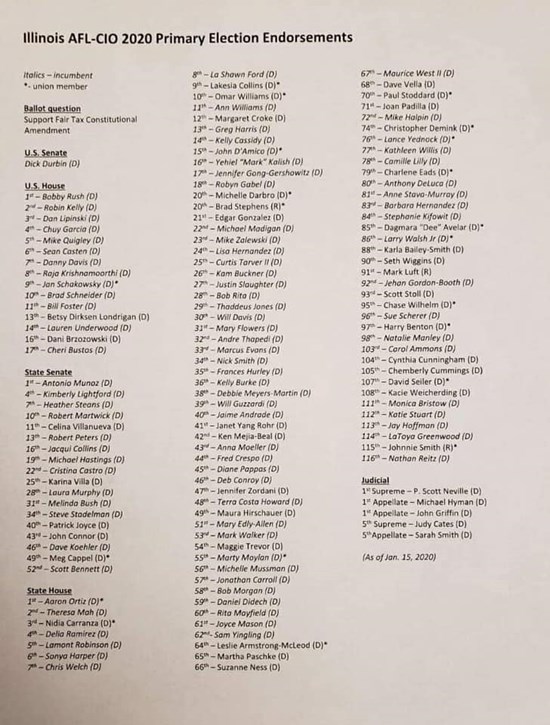 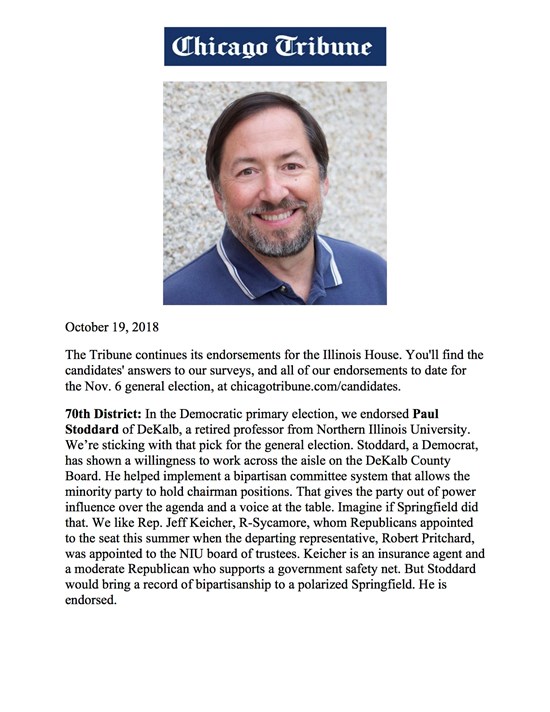 The Trump Administration has made it clear that it will not drop its assault on science and facts. More than ever, our country needs those with scientific training to heed the call and run for public office. Today, 314 Action is proud to stand with these candidates who have pledged to base policy on evidence. Some of the most egregious attacks on science occur at the state and local levels, which is why these candidates and their campaigns are so important in today's political climate.

On behalf of our 92,000 workers in child care, home healthcare, nursing homes, and health systems whom we proudly represent, we would like to congratulate you on receiving SEIU Healthcare Illinois’ official endorsement for your candidacy in the November 6th, 2018 General Election.

"70th District: In the Democratic primary election, we endorsed Paul Stoddard of DeKalb, a retired professor from Northern Illinois University. We’re sticking with that pick for the general election. Stoddard, a Democrat, has shown a willingness to work across the aisle on the DeKalb County Board. He helped implement a bipartisan committee system that allows the minority party to hold chairman positions. That gives the party out of power influence over the agenda and a voice at the table. Imagine if Springfield did that. We like Rep. Jeff Keicher, R-Sycamore, whom Republicans appointed to the seat this summer when the departing representative, Robert Pritchard, was appointed to the NIU board of trustees. Keicher is an insurance agent and a moderate Republican who supports a government safety net. But Stoddard would bring a record of bipartisanship to a polarized Springfield. He is endorsed." — Chicago Tribune

I am pleased to inform you that you have been endorsed by the Illinois Federation of Teachers for the November 6, 2018 General Election.

An endorsement from the IFT is a signal to Illinois voters that you will be an advocate for publc education and vital public services and a staunch supporter of working families.

IEA’s local committee from House District 70 has unanimously chosen you as our recommended candidate for the upcoming election.

Congratulations!  You have earned the 2018 General Election endorsement of the Illinois AFL-CIO.

Your support of the Illinois AFL-CIO on issues affecting the working men and women of Illinois earned you the endorsement of the State Federation Executive Board.

We cannot thank you enough for your courageous support for common sense gun safety and saving lives.  It is our great honor to endorse you. 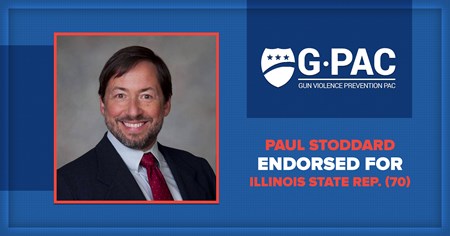 We are pleased to inform you that the Executive board of the Illinois Alliance for Retired Americans voted to endorse your candidacy in the 2018 General Election for Illinois House District 70.

Congratulations! The Illinois Retired Teachers Association Political Action Committee (IRTAPAC) has endorsed your candidacy for the 2018 General Election. Your knowledge and positions on the issues impressed the IRTAPAC Committee and IRTAPAC Board of Directors

Solutions for increased carbon not easy, but necessary

The Primary is Over - We Won! On to November!!

Paid for by Citizens For Stoddard
Powered by CampaignPartner.com - Political Websites
Close Menu